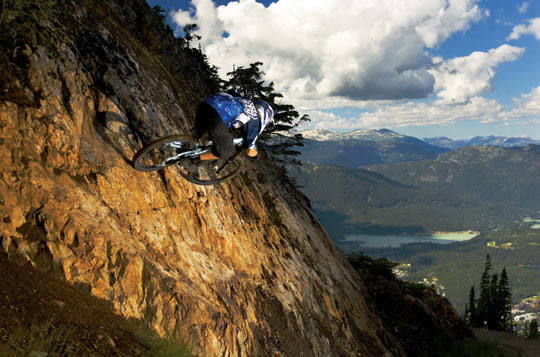 If you’re thinking about visiting Canada (late holiday deals are available from Thomas Cook), you might be asking yourself how are you going to make the most of such a huge place in a week or two. Here, we take a rundown of the best attractions and places of interest Canada has to offer so you can plan your trip around seeing as many of them as possible…

Looming astride the BC/Alberta border, the Canadian Rockies boast some of the most breathtaking scenery on earth. Topped with heavy glaciation, the sharp points of the mountain and glacier-strewn valleys below make for real picture postcard views – quite distinct from the rounder, less dramatic continuation of the Rockies that cuts through the US border and on down to New Mexico. The best way to see the Rockies is by car, starting from Calgary or Edmonton and travelling through Banff to Jasper National Park.

After the maple leaf, Niagara Falls is probably the single most iconic image of Canada, and a must-see for visitors. Actually three separate waterfalls (Horseshoe, American and the smaller Bridal Veil Falls), Niagara creates a dramatic plunge in its namesake river, just at the border of Canada and the US. You’ll have probably seen film of Niagara, but nothing prepares for you for the sheer, mesmerizing power of the thundering water, and the mystical aura created by the natural environment. Best of all, Niagara is seriously well-linked to civilization, with 4 international airports within an hour’s drive of the Falls – Toronto, Hamilton, Niagara Falls and Buffalo – and excellent bus and train service from the US and within Canada.

Yawning between Nova Scotia and New Brunswick, the Bay of Fundy is famous for having the highest tides in the world. It’s reckoned that each tide cycle generates 100 billion tonnes of water flow. The dramatic cliff-faces and sandstone obelisks offset the mud flats and marshes quite strikingly. And such diversity of landscape has promoted a similarly varied ecosystem, with 8 species of whale known to the area, and countless dolphins, fish, seals and birds. If you’re based in Saint John or New Brunswick, the best way to experience the Bay of Fundy is by car, bike, foot or kayak.

250km from Montreal, the beautiful Old Town of Quebec is the only North American city whose fortified walls still exist. Sitting on the St. Lawrence River, the city was a vital strategic outpost, and tells a fascinating story. Fly into Jean Lesage Airport and discover Quebec for yourself!

Cape Breton boasts a 300km highland trail to make Nova Scotia redolent of Old Scotia. It’s not a walking trail, but a winding drive round the mountains above the Gulf of St. Lawrence, ending up in the stunning scenery of Cape Breton Highlands National Park. Well-linked, the closest airport is Halifax International.