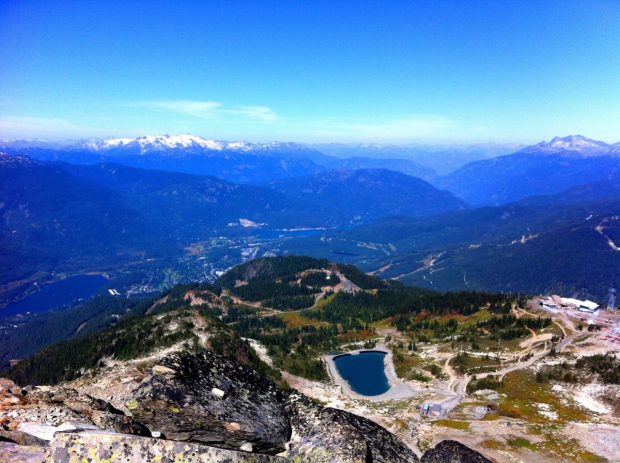 Skiing and snowboarding mums of all ages are invited to attend the Mum’s Mountain Classic. This fun, annual event includes morning coffee, race practice, a match-time race, lunch and apres festivities. The theme for this year’s race is Pirates of the Caribbean. There are several different categories and lots of great prizes to be won.

Whistler Blackcomb turns up the heat one last time in April with its famous Fire & Ice Show. Be amazed as ski and snowboarding pros jump through a dazzling ring of fire while fire spinners and fireworks light up the night sky. The event finishes with Johnny Cash’s familiar voice singing his famous Ring of Fire. Held at the base of Whistler Mountain this is a free, fun event for the whole family.

Each Monday from now until April 27, LUNA and the Squamish Lil’wat Cultural Centre join forces to present independent documentary films aimed at engaging audiences on important socio-political, environmental, cultural and economic issues in Canada and worldwide. Admission to these events is by donation, doors open at 6:30 p.m. and screenings start at 7 p.m.

Now in its 17th year, the Whistler Cup has grown to become the largest and most important ski race in North America, and internationally, for athletes aged 11 – 14 years. With over 390 young athletes from 17 countries, Whistler Cup brings together children from many different cultures, from around the world. With the 2010 Winter Games fast approaching, Whistler Cup is the must-attend race for athletes and sponsors not only in the U.S. and Canada, but around the world. For many of our young Canadian athletes, this is the first opportunity they have to meet and ski with the world’s best. Cheer on the athletes during the Whistler Cup Parade on Friday, April 10 beginning at 5 p.m. in the Village. Members of the public are invited to become involved in the event, for volunteer opportunities visit: www.whistlercup.com

Visit Whistler during Easter as the Village comes alive with music, dream characters, live painting and crafts. Town Plaza Gazebo will be the hub of flag craft creations and a prime location to wave from as the Whistler Cup parade passes by. In Village Square, Cary and Paulo Lopes will be painting faces and making fantasy come to life with their extravagant sky-reaching characters. Whistler artist-athlete extraordinaires, Vanessa Stark and Olivier Roy, will team up again to paint live and add colour to Mountain Square and local musicians will be scattered throughout the Village playing original songs and old favourites.

The TELUS World Ski & Snowboard Festival has been called so action-packed that “you’ll be juggling your agenda like a circus monkey.” 10 days and nights of live music, arts and sports, fused together and dropped against the best spring skiing and riding in the world. Held at the Host Mountain Resort of the 2010 Winter Games, it’s ground central for value-packed and awe-inspiring action. The TELUS World Ski & Snowboard Festival features Canada’s largest free outdoor concert series, pro ski and snowboard competitions including the World Skiing Invitational Big Air, Superpipe, the Orage Masters and the Grenade Games, career-making photography, film and fashion showcases, burn-the-candle nightlife, and so much more. For the latest event information visit: www.whistler2009.com

Eight teams of four skiers (three male and one female) battle head-to-head in an event that’s truly taken on a life of its own. Rightfully dubbed the “Anti-comp”, The Orage Masters is one part slopestyle, one part free-for-all and one part masquerade party. And the only place you’ll find skiing’s heavy weights riding in anything from Wizard of Oz costumes, to Chuck Norris suits to pirate outfits. Competing for unique prizing on a custom built slope course, The Orage Masters is unlike anything you’ve ever seen before. www.whistler2009.com/oragemasters

New for 2009, State of the Art features break-out and renowned contemporary artists from the worlds of street and snow. The TELUS Whistler Conference Centre Grand Foyer will be transformed into a place of mind-bombs and eye-candy showcasing over 30 artists in a 150-plus piece installation. Art mediums include canvas, sculpture, skate decks, photography, film and graffiti. www.whistler2009.com/art

Out in the field, the mountains, the surf, they lug gear and lenses to capture the most dynamic moments in action sports, pushing back the passage of time with their shutter-fingers, and an eye for the extraordinary. At the 12th annual Olympus Pro Photographer Showdown, these freeze frames are curated into nine minute digital slide-shows by a half dozen of the best lifestyle and action photographers in the world, competing for the title of Best in Show and a $10,000 grand prize. Dubbed the “Sundance Festival of Action Photography”, the TELUS World Ski & Snowboard Festival’s Pro Photographer Showdown is a visual feast and the preeminent action sports photography event in the world. www.whistler2009.com/prophoto

New for 2009, the Grenade Games have set themselves apart as the snowboard industries best end-of-season contest and party, now in their fifth year they are coming to Whistler for the first time during the TELUS World Ski & Snowboard Festival. In the tradition of the Grenade Games, the contest will combine typical snowboard events with an unexpected twist. The Superpipe has evolved into something bigger and better, snowboarders will be challenged to hurl themselves down a mogul field for the first-of-its-kind dual slalom mogul event, and all of it will be capped off in front of thousands of screaming fans on the night of Saturday, April 26. www.whistler2009.com/grenadegames

New for 2009, this multimedia event aims to take the photography slideshow to the next level, with an open form call for new media creations that morph film, photo, graphics, sound and sport into digital art that is smarter and greater than the sum of its parts. The rules are simple – entries must be projectable, three-five minute long original works that are informed by some kind of collaboration – of medium or of minds. Six to 10 finalists will be chosen to screen at the ThreePointOh Gala, on Monday April 20 at the TELUS Whistler Conference Centre. www.whistler2009.com/threepointoh

Filmmaking becomes an athletic endeavor at Whistler’s annual 72 Hour Filmmaker Showdown. The competition, an integral part of the TELUS World Ski & Snowboard Festival’s line-up, challenges artists to perform feats of speed, endurance and precision, with the call to shoot, edit and produce a three-five minute digital film set within a 100 kilometer radius of Whistler in the space of 72 hours. Featured films have gone on to win XDance prizes, MTV screenings, and viral web domination. The event concludes with a gala ceremony at the TELUS Whistler Conference Centre, April 21. www.whistler2009.com/film

Don’t miss the opportunity to fine tune those skiing or snowboarding skills or the chance to try one of these sports for the first time before the season ends. During Discover Whistler Days save 40 per cent off the regular price of select Whistler Blackcomb ski and snowboard school programs. www.whistlerblackcomb.com/rentals/school/dwd.htm