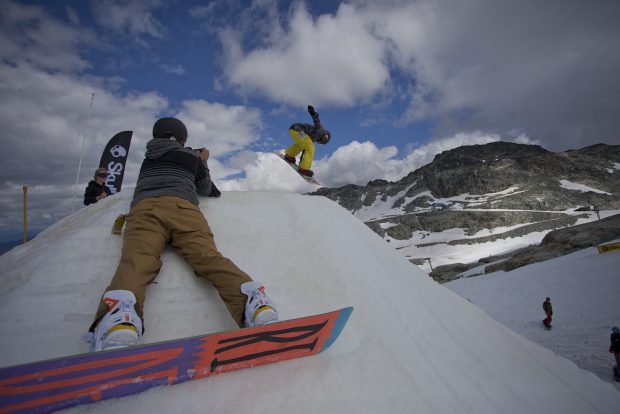 Annually, thousands of visitors flock to Whistler, British Columbia for the world’s best snowboarding. The nearby resort: Blackcomb Whistler has recently been named best snowboarding town by “Transworld Snowboarding”. The area is so acclaimed for its snow activities that Whistler will host the snow events for the 2010 Vancouver Olympics and Paralympics. With its high caliber amenities, resorts, trails, and long season it is no wonder that Whistler is a Mecca for serious snowboarders.

The snowboarding and skiing season typically lasts from late November through late June, but those who prefer to board on the glaciers can do so through July. Temperatures range from lows of -12 degrees Celsius in winter and -8 degrees through May. Average high temperatures are -5 degrees in winter and 5 degrees in spring.  Whistler has an average annual snowfall of 10 meters and over 200 trails for snow skiing and boarding. Creekside elevation is 635 meters above sea level while nearby Whistler Village stands at an elevation of 675 meters with 3,307 hectares of terrain. Scattered throughout the area are a dozen resorts in the Whistler area which allow snowboarding, and all of these have a myriad trails in a range of difficulties for beginners through experts. Some of the terrain options for boarders seeking variety include half pipes, terrain parks, tree runs, glaciers, and groomed corduroy.

For those looking for premier access to trails in Whistler, a Fresh Tracks ticket is recommended. These allow snowboarders access to the slopes an hour before they open for skiers. Fresh Tracks tickets are only available certain times of the year, so it is best to discuss it with a travel agent along with accommodations and dining options in the area.