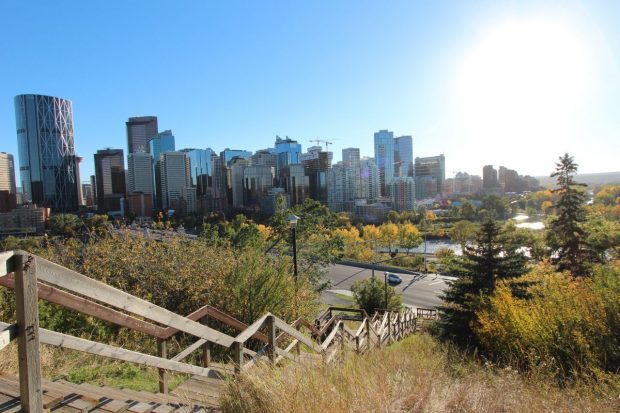 An Insiders View of Calgary, Alberta.

Laura was born just outside Toronto, which is where she lived until she was 13, when she moved to Calgary – a city of which she is a huge fan.

“Calgary is an up and coming city, you really get that vibe as you go downtown,” she explained, “There’s about 1m people, it’s the fastest growing city in Canada, it’s getting bigger and bigger and you can tell that when you go downtown.”

The nightlife and entertainment is a big aspect of Calgary according to Laura, who says the myriad of late-night opening bars and clubs cater for all tastes from posh, over-21 clubs where the drinks are expensive to even country music clubs, ones Laura advises you to give a miss unless you want to see something really different.

Also, in most communities you can go to regular pub nights, called wing nights, which are on usually held on the slow midweek nights. Laura recommends these for the excellent atmosphere, even if you’re not too partial to chicken wings.
Back downtown, 17th Avenue has become the place to be, nearby the home of the Calgary Flames Ice-hockey team. The team reached the play-offs recently, sparking many a night of celebrations in the avenue.

Laura says Melrose lounge is a must, a good mix of pub and restaurant with great atmosphere.

To cap it all off, the legal drinking age in Alberta, the state in which Calgary lies, is 18, one of only three states, (the others being Quebec and Manitoba), which has this limit. The others, including British Colombia where you will find Vancouver, all have a limit of 19.

A word of warning from Laura though: “ID is a big thing, They ID anybody who looks under 25.”

Being a relatively new city, Laura says Calgary does not have a lot to it in terms of history, but it certainly has excellent shopping. There are a couple of huge malls, which are very different from London’s Oxford Street. You often don’t go outside because of the weather, so you could spend a day there. These include Chinook Mall to the south, T-D Mall downtown and Market Mall to the north.

One big plus about Canada is the exchange rate. At the time of writing it was 2.4 Canadian dollars to the pound. “British tourists will feel loaded when they go there,” Laura added.

There are a raft of things you can get up to according to Laura.

Calgary Zoo is recommended by Laura, who said that her friends have labelled it better than the renowned San Diego zoo.
Also highly recommended is a game at the Ice Hockey.

Laura says: “The Flames (www.calgaryflames.com) are an excellent thing to see, they made it to the play offs last year and there was a really good feeling around Calgary.”

Also if you’re lucky enough to catch the draft, if it comes to Calgary, this can be quite fun. It is when all the young players try out for the hockey leagues. The Hitmen is Calgary’s junior team and does quite well, and also is a good team to watch, according to Laura.

Another team that might peak your interest include The Stampeders, who play in the Canadian Football League.
For two weeks of the year around July, Calgary really comes alive with the arrival of the Calgary Stampede, which is a massive rodeo with a whole host of side attractions.

Laura continued: “Calgary, is pretty friendly, especially during the Stampede, that’s when Calgary becomes a tourist city. The Stampede is a giant Rodeo that takes place in July for two weeks. There are rides and concerts and the city’s nightspots become very busy and alive with action,” Laura explained.

“For those two weeks it’s really fun to go to the clubs, everybody is wearing cowboys hats and outfits, there’s good music. it’s a lot of fun,” she added.

Other activities include water sports on the Bow River, which runs through Calgary and a visit to the Glenbow Museum , which is the biggest museum in Calgary. Glenbow is western Canada’s largest museum, with around 20 galleries and around 28,000 works of art.

But Laura does add one word of advice: “I picked up a book about Calgary and they said Signal Hill is one place to see, but don’t. It’s a big rock with numbers on it for planes flying overhead. I wouldn’t go there.”

Outside the city you are not far away from the Banff National Park, an 80 mile drive east or Edmonton which is a three hour drive.

Edmonton is close for attractions such as the West Edmonton Mall and amusement parks, but Banff offers much more than just snow sports.

Laura said she often goes to Banff for the night, partying and recommends any visitors to Calgary should pay Banff a visit.

In Banff you have the obvious snow sports, but also many other activities such as horse-back riding through the mountains, cross-country skiing and the natural hot springs, (which first led to the area being declared a national park), are a big attraction. Laura’s favourite pastime is taking a warm spa in the cold winter’s air. The tranquillity of Lake Louise is not far away as well. (www.banfflakelouise.com)
You can get to Banff by several major highways but also by bus from downtown Calgary and rental car is always an option.

The temperature in Calgary can be a bit unpredictable with the Chinook winds coming over the mountain making the weather quite varied. it can be -40 at some points in the winter and also +10. For this reason a visit in winter is not recommended!

Laura would recommend Calgary as a place to go to for a few days, maybe a week, but no longer. Perhaps a city you should see on your way to other destinations such as Vancouver or Toronto.

She said: “Compared to Toronto and Vancouver the cost of living is extremely cheap because there is no provincial tax in Alberta.

“The difference between east and west is phenomenal, but my favourite thing about Canada and Calgary is the mountains, it’s such a beautiful country.

Laura moved to London in September, 2004, after gaining her BA in English. She plans to spend a year here before continuing her training with the hope of becoming a teacher.

“It’s great, I really love it here. It’s noticeable that customer service staff are not as chipper. And it’s so expensive here. But there is a lot more to do in London, Calgary is such a new city you are not going to find historical monuments at all, it’s more shopping malls.”

Another thing Laura said was noticeable about Calgary is that it’s not very ethnically diverse at all. She said: “Toronto is a lot like London and Vancouver is quite diverse as well, but Calgary is a white, middle to upper class city, there’s a lot of money rolling around there. The night life is just as good as Vancouver or Toronto.
She added: “Calgary is finding its own feet, it’s not quite Toronto and not quite Quebec City. It is a bit closer to Vancouver, there’s a feel to it, it’s a fun and exciting place to be.”