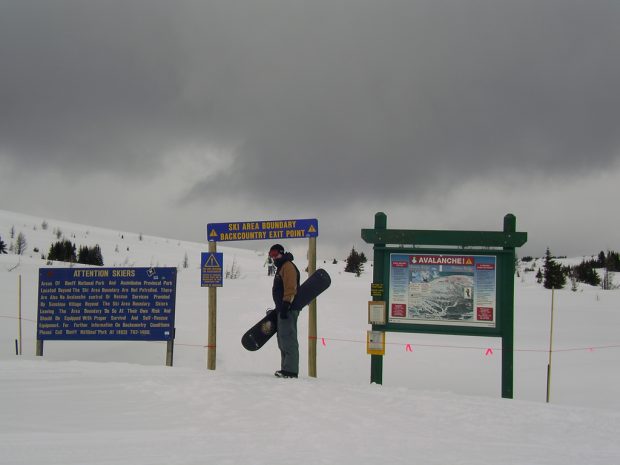 Snowboarding in Banff by Gary Miles

I would say my level of snowboarding is quite high, I can board both single and double diamond black runs and have started doing rails and jumps, no 180s yet but it won’t be long now.

The best thing about Banff for me was the 3 different mountain ranges that you can board.  You can get a tri-area lift pass and ski Lake Louise, sunshine village and then the smaller Banff Norquay after that.

The snowboarding was excellent, there are loads of runs and each of the mountains has a Park for playing on the jumps and rails, we spent most of our time in the park at sunshine village.  There are no real flat spots that we found either which is great for boarders.  There is also some very nice half pipes for the more advanced.

We stayed at the Inns of Banff; I think it was great value and a very nice place to stay.  The room had 2 Queen Size beds with a TV, Fridge and power shower.  There was also an outdoor hot tub, indoor Jacuzzi and small swimming pool in the hotel.  The ski rental shop is at the same location as is a bar and Japanese restaurant.  The hotel staff were extremely helpful and friendly.

This was my second visit to Canada having been to Whistler 2 years ago, for an overall holiday I think Whistler would edge it. Mainly because everything is so close together at Whistler and there is no need to get buses anywhere. Banff is a different story as you have to get buses to all the slopes where as whistler had 2 mountains within 5 minutes walk off out hotel and the main village.  Both have great areas to ski though with Banff being a little more varied.

In my opinion Canada is far better than Europe for skiing and boarding for the quality and quantity of snow and because of the friendlier people.  It also helps that you get a lot more for your money in Canada.

I purposely waited until I was out there before I brought my gear.  I got a board and bindings for about £100 less than the board alone would have cost me in England.  I also did the same on my trip to Whistler, picking up some Bonfire Snowboarding Pants for about £80. The exchange rate helps a lot.

Without a doubt the must do thing in Banff is the snowmobiling, one of the best days out you can have, great scenery and it makes a nice break from the boarding.  The only thing to be aware of in Canada is that most places don’t show the 7% tax you have to pay on anything you buy, but once you remember to add that on you will still get a bargain in Canada.

Banff’s nightlife was good, we loved the Rose and Crown which was quite lively later on in the evening and always has live bands playing.  Food wise everywhere was nice, they have a Chinese restaurant, many steak houses and pasta restaurants.  The Keg House near to the Inns of Banff does a lovely steak.  You’ll love Banff!