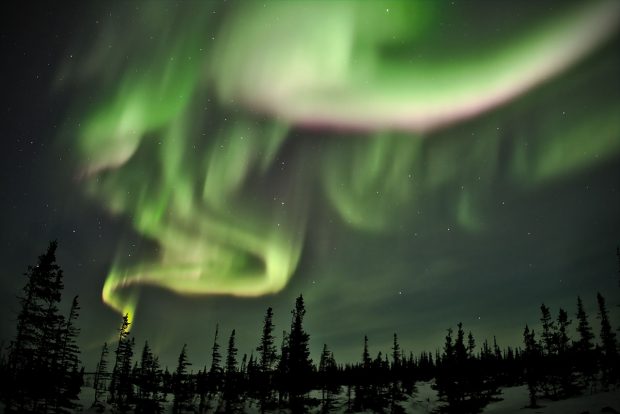 Magic Sky: Where to See the Northern Lights in Canada

The Northern Lights, or Aurora Borealis, are a captivating polar phenomenon: a shifting, rainbow hued luminescence that set frozen arctic night skies ablaze. Known as the ‘Dance of Spirits’ by the First Nations Cree people, believed by the Lakota Sioux to be the embodiment of souls yet to be born, portrayed as gateways to other worlds in Philip Pullman’s Dark Materials trilogy; the Northern Lights cast a spell like no other, and Canada’s snowy north is the perfect place to spot them.

Equally famous for Northern Lights spotting as for being the Polar Bear capital of the world, Churchill is located near Hudson Bay in Canada’s Manitoba province. The lights can be seen from November to March but if you want to combine your spotting with a Polar Bear safari, visit in late October to early November when sightings of the animals reach a peak. The area also boasts wildlife such as Beluga Whales, Arctic Foxes and Caribou and some truly spectacular vistas. 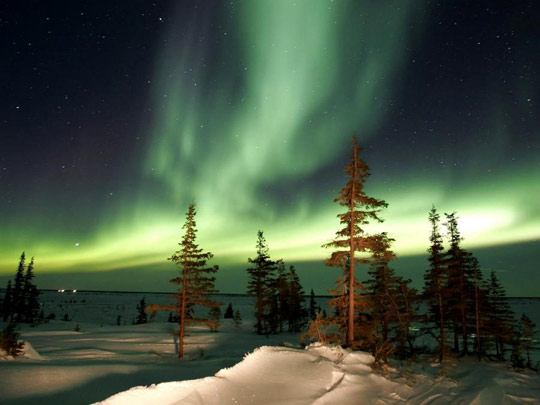 Yellowknife is the capital of the Northwest Territories and sits on the north shore of Great Slave Lake, 500km from the Arctic Circle. Head out snowmobiling, dog sledding or cross country skiing then spend your nights watching the light show mirrored in the lakes’ vast black waters. For extra winter magic schedule your trip during March’s annual Snowking Festival which centres around a giant snow castle complete with courtyard, cafe and slide.

Between August and March, when Nunavik is blanketed in both darkness and glittering snow, the Northern Lights appear. Nunavik has a strong Inuit presence with a population almost ten thousand living in the area, working closely with the land and maintaining a modern, yet traditional, lifestyle. This is a place to feel engulfed by the vastness of nature: the limitless swathes of tundra, the black depths of ice cold waters contrasting with the stark whiteness of giant icebergs; a place to be outnumbered by Musk-Ox and ride on a sledge driven by huskies. A magical place to witness a magical phenomenon.

The Northern Lights can be spotted year round in the province of Ontario and have even been seen from larger cities such as Toronto; however for your best chance of a spotting get away from the city lights entirely with a specialised tour company and watch the show from the great stillness of Lake Superior, the world’s largest freshwater lake. This area is perfect for spotting the Northern Lights as it has so little light pollution. Even without the Northern Lights, Lake Superior is a stunning area of great natural beauty and is magical any night due to the thousands of stars that pinprick the sky; if you can stand the cold you can even camp under the stars for a taste of absolute wilderness…

This is a guest post by Helen Cross who works for travel site Simonseeks. Simonseeks provides exhaustive, expert rated guides to New York Hotels and London Hotels. There is also a wealth of travel guides dedicated to tourism in Canada.