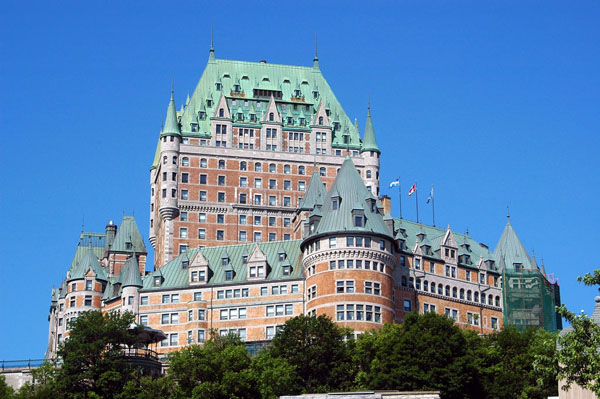 Just a few hours north of Canada’s border with the U.S. state of Maine – and a short drive from Montreal, Quebec City, Quebec feels much like a small French city has been transported across the ocean to Canada.

Located in the province of Quebec, a predominantly French speaking area (in fact, the official language of the province is Quebecois, a dialect of French), Quebec City is the oldest city in North America and offers all of the charms of France without the long flight. Winding cobblestone streets, stone buildings, charming cafes and world-class dining and lodging await visitors looking for charm, romance and history.

While the city is highly influenced by French culture, it is still a modern Canadian city. If you want to experience this “mini-France” and capture the spirit of Europe, keep these tips in mind.

Paris, France is world-renowned for its fine dining and classically trained chefs, and that influence has traveled to Quebec City, where you’ll find a wide variety of traditional French restaurants among the trendy hotspots serving more international and fusion cuisine.
The most popular dining option in Quebec City, particularly in the older part of the city, is a multi-course “prix fixe” meal. Ranging from three courses up to six, at these establishments you’re served your choice of meals from a set menu; usually there are no more than two or three entrée choices, often a beef or game dish and a fish option. When you order from the prix fixe menu, you pay a set price for your meal, which may or may not include a wine pairing. Service is formal, much like you would expect in a fine French restaurant, with your meal often served with great fanfare and tableside preparation. Savor the experience – dinner can often last for several hours.
Of course, not all meals in Quebec City are formal multi-course affairs. Lining the cobblestone streets you’ll find small cafes, bars and bakeries serving traditional French and Canadian food. Visit a market for bread, wine, and cheese and have a picnic in the park, or sip a café au lait in a sidewalk café. You’ll swear you’ve been transported to France.

Is there anything more French than a castle towering above the city? Indulge in your fantasy of living as French royalty by booking a room at the Fairmont Le Chateau Frontenac, overlooking the St. Lawrence River. This luxurious hotel in located in a historic building modeled after a traditional French palace and dominates the city skyline. If you’re on a budget, there are plenty of comfortable cheap hotels, inns and bed and breakfast lodges that offer package deals including meals, spa treatments, sightseeing and more. For the truly French experience, though, try to get a room at the Chateau Frontenac, or stay in one the guesthouses of old Quebec City, where you’ll be treated to rustic charm and a traditional French breakfast.

Most visitors to Quebec City gravitate to the older part of the city, which is easily explored on foot. Park in one of the public garages or lots, and head to the Terrace Dufferin, a wooden promenade along the river. During the summer months, the Terrace comes alive with street performers and vendors, and in the winter, it is the site of many of Quebec’s winter carnival activities.
Also be sure to explore the Place Royale and Le Petit Champlain, two of the oldest and most picturesque areas of the city. Stroll the cobblestone streets in the pedestrian area and explore the shops and cafes, or take in the murals depicting life in the city throughout the centuries. With almost everyone in this area speaking French, and the charming window boxes overflowing with colorful flowers in the spring and summer, it’s very easy to imagine you’ve found a small French village.
Quebec City combines French and Canadian cultures to create a one-of-a-kind, must-visit city. While the city comes alive with colors and activity during the summer months, even when the temperature drops, there is plenty to do and see here. From baroque cathedrals to modern boutiques, from simple bakeries to gourmet meals, there is no better place to experience French culture outside of France.