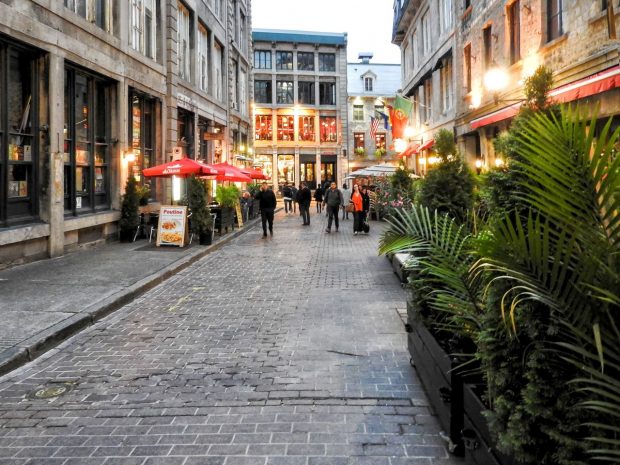 Located on an island in the St. Lawrence River, Montreal was originally known as Ville Marie. Discovered in 1535 by French explorer, Jacques Cartier, a cross was placed on the mountain that he named Mont-Royal. Inhabited by the Iroquoians for thousands of years prior to Cartier, their village was referred to as Hochelaga.

Colonized in the 1600s by the French, peace remained between the new settlers and the native people until the British gained control. Although the French were allowed to stay, they would be considered British subjects. Over time they were joined by the Scottish and Irish and lived harmoniously for many years.

70 years after Cartier, Samuel de Champlain arrived in Montreal and found that the Iroquoians had vanished. Setting up a fur trading post in 1611, this area attracted trappers and missionaries. Halting the city’s growth in the mid 17th century, a conflict between the French and Iroquois (not to be confused with Iroquoians) impacted the popuation due to fear of violence. Settlement began again in 1701 after a peace treaty was signed.

Incorporated as Montreal in 1832, the city was opened up to continental markets for the first time in history. With the construction of the Lachine Canal and the Victoria Bridge across the St. lawrence River, an economic boom attracted people from all over.

Not long after the outbreak of World War I, Montreal became a place for Americans to engage in partying and was known as the original “Sin City.” From 1920 to 1933 the Eighteenth Amendment to the United States Constitution banned the manufacture and sale of alcohol. Not only a hot spot for drinking, Montreal also offered burlesque clubs, jazz clubs and gambling rooms.

With the arrival of more Scottish and English immigrants near the end of the 19th century, taverns were established in response to a blue collar work force. By 1970 over 700 taverns all over Montreal made this a good business to go into. As younger families and professionals moved to the outskirts of the city, industries closed their doors and taverns dwindled to 68 in less than 30 years. Becoming the cultural center of Canada in 1960, Montreal remains a sophisticated city.