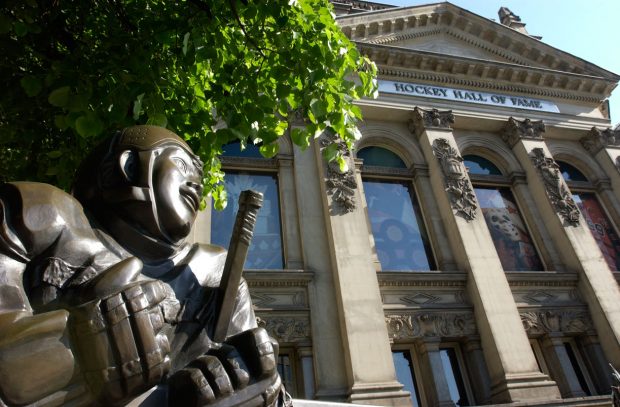 You don’t have to be a lifelong fan of musicals to appreciate a Broadway Show if you visit New York City, USA. You don’t have to be a pizza aficionado to enjoy a slice with pepperoni when you visit Rome, Italy. The same could be said for the Hockey Hall of Fame in Toronto, Canada. Part museum, part attraction, the Hockey Hall of Fame is a delightful diversion for anyone visiting the Toronto area, not just for fans of the sport.

Like the Halls of Fame for the other major sports, the Hockey Hall of Fame in Toronto is a virtual shrine to the past greats of the game. The Great Hall contains a portrait and history of every member inducted into the Hall of Fame over professional hockey’s 100 year history. Lined up along the middle of the room is a spectacular display of championship trophies from the National Hockey League (NHL).

There is a small theater in the Hall that shows a film called The Stanley Cup Odyssey. For the non-fan, this film is a primer on all things hockey, covering more than a century from the inception of the game up until the most recent Stanly Cup championship in 2008. For those who are already hockey fans, the show is a visceral reminder of the greatest moments in the proud history of the game.

For those who prefer a more interactive experience, there is a high-tech rink available to test your skills against computer simulations of some hockey legends. Visitors can try their skills as goalie, defending against the legendary Wayne Gretzky and Mark Messier. The hockey superstars appear, life size, on a giant screen. You can see them draw back, swing… and a sponge-like puck launches through a hidden opening in the screen directly toward the goal, and only you can stop it.

In addition to proving their mettle as a goalie, visitors can also take to the offense, pitting their best slap shot against a computer-generated goalie. The set up is extremely realistic; the participant uses a real hockey stick and puck against the virtual goaltender. Different levels of play ensure that anyone from beginners to avid hockey enthusiasts can participate in the interactive arena.

Perhaps the most revered trophy in all of sports is the NHL’s Stanley Cup. In an ornate shrine known as Lord Stanley’s Vault, visitors can view the original Stanley Cup, which dates back to 1892. Even for those with no prior knowledge or interest in hockey, it is hard to visit the Vault without coming away with a sense of the history and the majesty of the game.

While the Hockey Hall of Fame is primarily devoted to the NHL, there is an entire exhibit hall dedicated to hockey around the world, including European leagues and the Olympics. What hockey museum would be complete without paying homage to the famous “Miracle on Ice” in the 1980 Olympic Games? There is even a display honoring the recent introduction of professional women’s hockey.

Hockey is a part of the culture in Toronto, and the Hockey Hall of Fame captures the heart of their passion for the game with a wonderful blend of history and high technology, a reverence for the past on the cutting edge of the future. The admission prices are reasonable and the attractions can easily occupy visitors for half a day, perhaps longer for die-hard hockey fans. Centrally located downtown, just one block east of Union Station, The Hockey Hall of Fame is an essential stop when visiting Toronto.