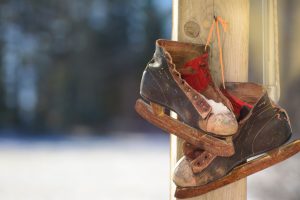 When I was younger, nothing got me into the spirit of the holidays more than ice skating. There’s something so lovely and wintery about lacing up a pair of skates and sliding out on to the ice, wobbling as you go. I was never very good at ice skating, and I spent more time on my bum than standing up, but I still love to do it. This year, I’m spending Christmas in Mississauga, and there’s no shortage of places for me to indulge in my ice skating habits. To bring you in on my family’s tradition, I’m going to tell you how you can go ice skating in Mississauga this year.

The easiest place to get your fix of ice skating is in downtown Mississauga, at the Celebration Square. The site of movie nights during the summer, it transforms into a delightfully wintery wonderland as soon as it’s cold enough for water to freeze. The ice rink is open every day from 10 in the morning til 10 in the evening, and even if you decide you want to go skating on Christmas, you can! I love meeting friends here, because it’s so central and easy to get to, and there’s a Tim Horton’s really close by to pick up some hot chocolate when you’re done.

Since you can rent skates at Celebration Square, it’s much more accessible to people the Burnhamthorpe Arena is, though that rink is covered, and so you won’t be as cold there. If you’ve never gone skating before, you might fare better at the Burnhamthorpe Arena just because there will be things to hold on to (besides people). People are very kind in Mississauga, though, so if you need a few tips and can only make it out to the Celebration Square rink, don’t despair! It is usually a better idea to head out very early in the morning or later in the evening if you’d rather learn when there are fewer people around.