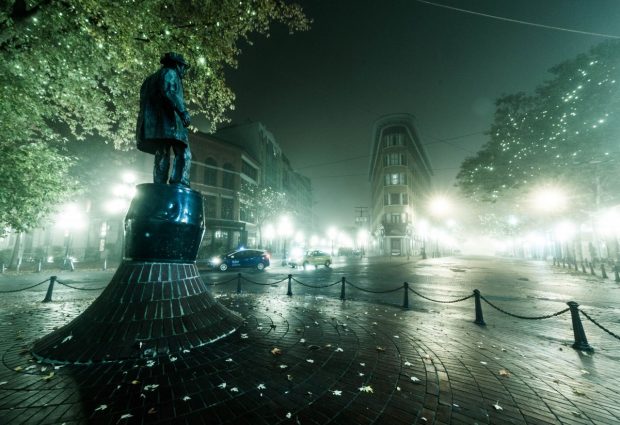 In the beautiful setting of British Columbia, surrounded by vast lakes, forests, and plains, is the city of Vancouver. Situated on the mouth of the Fraser River, and against the Burrard Inlet, Vancouver is a thriving, cosmopolitan city and one of Canada’s major seaports. Vancouver, like most cities in Canada, comes from humble and quiet beginnings. Its original inhabitants were peaceful Coastal Salish groups, including Squamish, Tslel-Watuth, and Musqueum tribes. The abundance of natural resources in the Vancouver area allowed these indigenous people to survive and thrive for thousands of years.

The arrival of Spanish Captain Jose Maria Narvaez in 1791 to explore Vancouver’s coast marked the beginning of European interest in the area. The following year British naval captain George Vancouver arrived and explored the inner harbor of Burrard Island. Several years later, established trader Simon Fraser made his way down the river that now bears his name, and became the first European to set foot on what is now modern-day Vancouver. However, a hostile encounter with wary Musqueums forced him to leave soon after his arrival, and nearly cost him his life.

In 1861, the peaceful and unspoiled site of what was to become Vancouver was rocked by a stunning declaration: there was gold to be found on the Fraser River. Suddenly, 25,000 Californians poured into the area. The Cariboo Gold Rush , as the migration was called, led to the first non-native settlement. Soon after, planned settlements like Moodyville also arose. The introduction of a sawmill in Moodyville in 1863 quickly made logging in Vancouver very profitable, and lumbering became the most important industry in Vancouver. The main center for lumbering and the area’s economic hub eventually became Hasting’s Mill, around which the city of Vancouver grew up.

In 1867, river pilot and renowned storyteller “Gassy” Jack Deighton opened a tavern at the edge of Hasting’s Mill. A tiny settlement quickly formed around it, which was eventually called Gaston, from “Gassy’s Town”. In 1870, the colonial government surveyed the settlement and made the town official. The name of Granville was chosen for the British Secretary of State for the colonies, Granville Levison-Gower. Soon after, the new town had the honor of being chosen as the ending point of the Canada Pacific Railroad. On April 6th, 1886 the very year the transcontinental train made its first momentous journey, Granville was incorporated as a city. Its name was changed again, this time to honor George Vancouver. Sadly, just over two months after its incorporation, on June 13th, a wayward brush fire broke out and wiped out the entire city in the space of 30 minutes.

Vancouver’s inhabitants managed to rebuild, and In 1914, the city’s fate changed for the better once again. The building of the Panama canal meant easy Canadian acess to many trading ports once unthought of, both on the American East Coast and in Europe. British Columbia grew and thrived, and, as one of the country’s main trading ports, Vancouver followed suit.

The 1930’s, however, brought the Great Depression to Vancouver, and the city fell into a decline. Already rife with interracial tensions between Asian and White inhabitants, Vancouver descended into violence and riots.

After the Depression came the advent of World War II. In spite of the war’s grim purport, the city of Vancouver drew benefit, becoming prosperous again in the making of minesweepers, corvettes, and other war-related machinery.

During and after the war, Vancouver grew and modernized quickly, gaining international recognition as a metropolis in its own right. In the mid-nineties, a wave of wealthy immigrants from Hong Kong immigrated to Vancouver, sending property values skyrocketing, and putting Vancouver on par with cities like Paris and Tokyo. Soon after, however, the economy slowed.

Today, Vancouver prides itself as a bustling modern city with a reputation as a cultural center. It is also the future site of the 2010 Olympics.

From its roots as a lumber post to the shining city that it is today, Vancouver’s history remains a great story; that of a journey from humble beginnings to amazing success, the likes of which Gassy Jack himself, in his one-room clapboard tavern, could little have foretold.