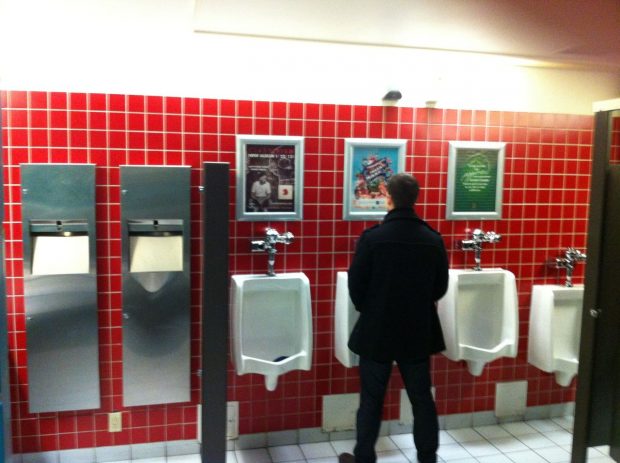 When Dancing for a Washroom in Toronto

When traveling, often you will want to urgently find a washroom. In Toronto we have no city owned washrooms except on land owned by the city so you want think ahead when you first have that feeling.

This was a result of a lawsuit that occurred at the beginning of the 20th century when the City of Toronto had washrooms. You entered these facilities at the street level and headed down a staircase to these underground washrooms. One of these washrooms was located at a major intersection and the business on that corner claimed that the value of their real estate was depreciated as a result. They sued the city. The resulting legal action finally ended up in the Supreme Court of Canada. The City lost and had to pay out $9,000 of the taxpayer’s dollars. As a result the city closed all city owned washrooms other than those located on land owned by the city.

Usually the term “washroom” is used to denote a public, commercial, or industrial personal hygiene facility designed for high throughput, whereas a similar term “bathroom” is used to denote a smaller, often residential facility for lesser throughput (i.e., often for only one person at a time to use). In Toronto a facility to go about your business is usually called a washroom or toilet. However other euphemisms exist and you might find your way there quicker by asking for a John, bathroom, restroom, powder room, little girl’s/boy’s room, water closet or lavatory.

However if you are a tourist in Toronto and find yourself dancing in discomfort looking urgently for a washroom here are some places where you can find comfort.

Public areas such as squares have washrooms

Most parks since they are owned by the city have washrooms. The difficulty is to find them and usually they are seasonal.

Go into a restaurant and ask to use the washroom. Often the answer is no. However buying something such as a cup of coffee or coke makes me a patron and therefore you are entitled to use their washroom.

Coffee shops such as Starbucks, Second Cup or Timothy’s. Often you can boldly walk in and use the facilities since the staff is busy serving a line of customers. However here again, often they require a key, so you might as well buy a coffee.

Find an office building and take the elevator to one of the floors and seek out a washroom. Unfortunately often these require a key as well.

Go to a mall and find one. Usually these are located near a food court. By law places where you eat in Toronto require a washroom.

Go into a hotel. They usually have public washrooms located near the reception area. If this is a five star hotel they are usually amongst the most pleasant of washrooms.

Many stores, like super markets have a public washroom.

Nightclubs and bars. Usually you can just walk in and go directly to the washroom. The more assertive and self assured you are the less chance you may be challenged.

Other cities like New York City even evaluate washrooms open to the public on the Internet. As I discovered Toronto has an evaluation site as well.  After your visit to Toronto you might want to add your comments there.

Other cities experience clean modern washrooms and like Paris charge for them. Paying for a nice and clean public washroom when you badly need it is much better than having no city washrooms like Toronto. Why doesn’t the City of Toronto do the same? Suddenly they become socialists when it comes to urgent needs?